WHAT TO SEE AND DO

HOW TO GET THERE

The future of Langley Mead

Because of the rich potential revealed by its past, Langley Mead is the subject of an ecological restoration project that aims to ‘turn back the clock’; to restore and make publicly accessible just over 18 hectares of the lost wildlife-rich landscape that once existed here.

Wildflower seed-rich green hay was brought in in 2013 from nearby surviving wildflower meadows at a Coronation Meadow (http://coronationmeadows.org.uk/) site known as ‘Moor Copse’ that was kindly offered by the Berkshire, Buckinghamshire and Oxfordshire Wildlife Trust (BBOWT) (http://www.bbowt.org.uk/reserves/Moor-Copse). This has replenished the pasture fields at Langley Mead with the plant species that are likely to have once lived here. Former arable areas with higher nutrient levels have also been sown with wildflower seed mixes.

A painstaking process of surveying vegetation, assessing soil conditions and nutrient testing had to take place, so that plant communities at the donor site could be matched with suitable conditions at Langley Mead, so that their seeds could be taken to the right place. 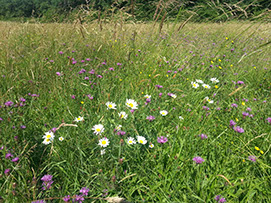 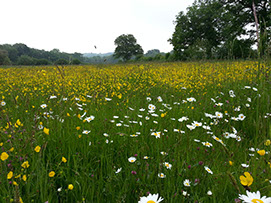 Above: The Donor Meadow that provided wildflower seed-rich green hay for Langley Mead.

Translocating green hay to Langley Mead on such a large scale required the help of farmers with modern farm machinery and the agricultural expertise necessary to collect and then move tonnes of hay at a time. Without the help of these farmers working in partnership with the ecologists, the objectives of the restoration would have been much harder to achieve. 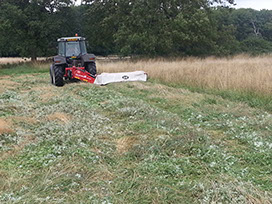 Above: Seed-rich green hay being mown and

collected up at the donor site. 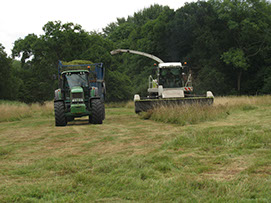 Above: Seed-rich green hay being

harvested at the donor site. 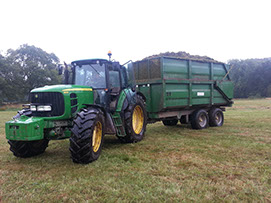 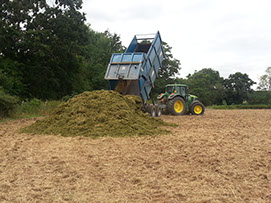 Above: A shipment of green hay being taken to Langley Mead. 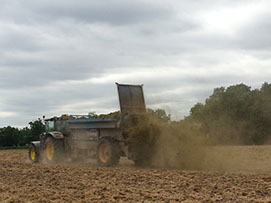 Above: Seed-rich green hay being spread over

Langley Mead by a muck spreader. The field had

been harrowed beforehand to prepare the ground.

In addition to the restoration of species-rich grassland, a new woodland has been planted in the area of the lost ancient woodland once known as ‘Costrill’s Coppice’, and ancient field boundaries have been reinstated. This has involved the planting of thousands of new trees and hundreds of metres of native species-rich hedgerow. The old line of pollarded Willows has also been reinstated; with gaps planted up with young trees to provide the next generation. 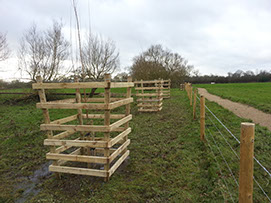 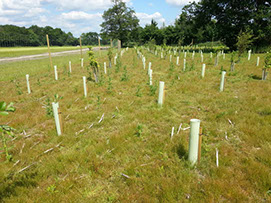 Above: Thousands of new trees were planted to provide a new woodland area, species-rich native hedgerows and reinstate an old line of pollarded Willows.

In only a very short time since the restoration efforts began, wildflowers and native grasses have already started to return to Langley Mead and reappear in new places.

The management regime now mimics the traditional management practices of the ancient past to ensure that these species remain and proliferate. A Ranger helps to look after the site, to promote its use as an educational and amenity resource for local people, and to manage the conservation grazing herd that is needed to restore and sustain a diverse grassland.

Visitors can see and learn about how a traditional landscape is influenced by the effects of the seasons, and watch as wildflowers and native grasses grow, flower, set seed, are cut and then grazed off as part of the annual cycle of a traditional English hay meadow; helping people to reconnect with the rhythm of the countryside and the natural environment.

You can download the Management Plan for Langley Mead here.

Icon made by Freepik from www.flaticon.com